Glancing through the Brand New Movie Trailer of the Comic Con, DREDD 3D that got launched for all its fans on 21st of September, 2012, it was an awesome move by the Producers considering the fact that the last production of the Movie was around 1995, starring Sylvester Stallone, honestly, I was a kid then, I saw the movie but can’t recall most of the action it brought, though the movie were showing things that are expected to happen in the very far Future, that’s all I can recall. 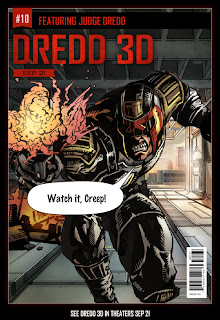 There’s absolutely no doubt, the Brand new Movie is indeed a splendid one, I never saw Judge Dredd remove his Helmet, through all harsh and moving times in every Scene.

WHO IS JUDGE DREDD?

Evolved from the comic strip from 2000 AD, Dredd is a Law Enforcer, given power to be Judge, Jury and Executioner in a a drastic Mega-City where things are going out of hand within the wasteLand as it already seems to be turning already.
This resulted in Judge Dredd taking charges, and put things in order around the Slums and its residents which had been cursed with Drug Lords and Barons.

If you wanna know more about this Movie, perhaps you should check it out on Wiki-Dredd

Without much words, let’s sit back, Relax, and watch the Trailer from DREDD’S Exclusive Trailer Debut in Cool HD…
Enjoy! 😀

Share this post
More like this:  Step Up 5:All In, Assembles Actors From Previous Parts
Previous Article
LATE 2012, MARVEL BRINGS PUNISHER MAX #4 – THE UNTOLD TALES
Next Article
Facing The Dark Willow in #4 – ANGEL AND FAITH